Kasaragod and Manjeshwar Taluk level KGMOA meeting held at Govt General Hospltal kasaragod Conference hall on 31/3/2019 . Presided by Dr Chandramohan Supt Taluk Hospltal uppala and Taluk Convener Manjeshwar Taluk ,Welcome by Dr Sayed Shuhaib Taluk convener Kasaragod Taluk . Inaugurated by Dr B Narayana naik District President KGMOA Kasaragod . CME : HIV/TB Double trouble Conducted by Dr Janardhana Naik Consultant physician GH kasaragod, GH Convener KGMOA , State Academic cell KGMOA was the Speaker. Excellent Topic presentation and Discussion.Later Dr B Narayana Naik President KGMOA kasaragod presented PPT on Public health cadre which was prepared and presented at state executive meeting and members actively participated in discussion on public health cadre and contributed various points Such as 1.Need for Nodal officers in state level and District level in General medicine for communicable and Non communicable disease and InOBG department for JSSk programme and National programme for Family welfare
2.Redesignation of Public health officer as Public health medical officer
3. Fixing Basic qualification for public health cadre is MBBS and equalent Recognised by MCI/ TCMC and it should be specifically and clearly mentioned which all Degrees are equalent to MBBS
4.Issue of RD /RT there should be separate posts for RD and RT just like microbiology, pathology and Biochemistry and there should be specific number of junior consultant, consultant , Senior consultant and chief consultant posts separately for RD and RT
5.There should be one Foresnsic surgeon post in Hospitals where there is fecilities for post mortem and posts should be designed same as other specialities
6.Specialists who join service should be given chance to work in thier speciality as asst sugrgeon before promoting to Junior Consultant post . There should not be a strict rule that they have to work as asst surgeon in phc which will make thier skills to lose if not worked in speciality
Other  General points raised in the meeting are
1. Now vehicles of health department deputed to election duties from health department. members raised not to depute vehicles from General hospital and District hospital which were used for call duty of doctors .without availability of vehicle for emergency call duty something happens KGMOA members will not be responsible for it and it is the responsibility of concerned hospital superintendent s to arrange alteranate vehicles for call duty
2. Now Doctors are denied of Call allowance  for emergency calls after duty hours. Action should be taken get call allowance
3.In some institutions Clerks are fresh hands and some are inexperienced and in some institutions there is clerks posted from other institutions for 3 Days in a week which is creating lot of problems to our fresh and single mo institutions doctors which should be solved and it is creating a lot of tension to our members in year end to utilisation funds
4.After implementing Speciality cadre token system came in all hospitals across state and Doctors are examing patients depends on thier speciality from 40 to 100 but now in some hospitals superintendent s are insisting to examine all patients who are taking token till 12.30 pm which will hamper the purpose of speciality cadre and there won’t be any quality in examining the patients if number of patients more than a doctor can examine. So there must be a guideline for examine op patients how many patients in each department should examine by a single specialist in his op time
5. Action must be taken to make strike leave as eligible leave 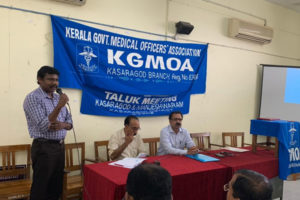